North Dakota's Young Republicans ain't gonna take it!  And oh boy did they piss off some folks at the top! Y'see, they just threw their support behind the guy THEIR VERY OWN PARTY is fighting in this years election. YIKES!

Kirsten Baesler is running for a third term as head of the North Dakota Department of Public Instruction, her opponent in the race is Brandt Dick.  It's a nonpartisan position so ya can't call this a Republican versus Democrat issue, but it has now become a Republican versus Republican issue.

Back in July 2020, The North Dakota Republican Party State Committee endorsed Baelser in a secret ballot. It was done in this fashion as COVID-19 concerns had cancelled the NDGOP convention scheduled to take place in Bismarck.

Baesler was arrested for a DUI in February of this year.  Back in 2015, while still in office, Baesler was arrested for domestic violence, although that charge was dropped. So, the Republican endorsement came as a bit of surprise to many.  Including my girlfriend who is as non-political as can a person can be. But you just say Baesler's name and Brenda will go on a rant about her.

It seems the North Dakota Young Republicans share this lack of support.  They just went off script and issued their own letter of support to her opponent Brandt Dick.  Which didn't sit well at all with District 15 Chairman, Vonda Markestad.  From the NDYR Facebook page.

Here's a tip for Vonda- don't every tell anybody to "stay in their lane".  That's as condescending as it gets...and it get's you this reply 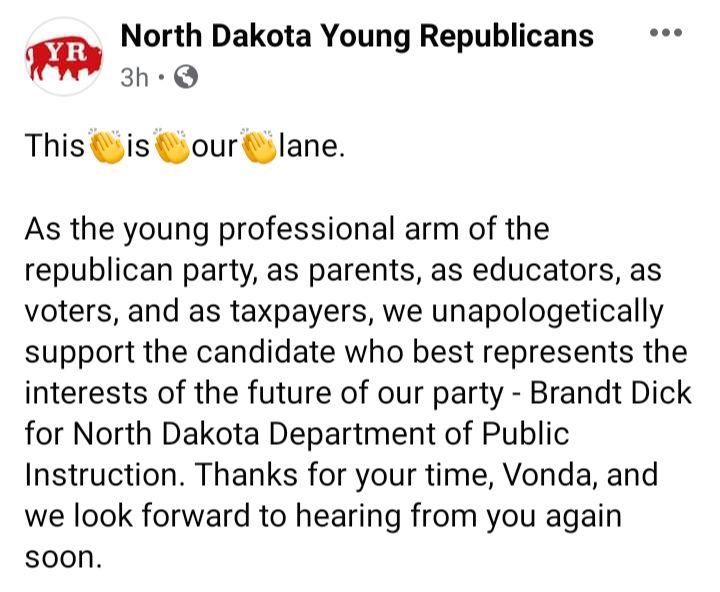 I could not be happier for North Dakota Young Republicans for taking a principled stand.  Boldly exercising their right to an opinion that actually isn't march-step with their political peers. Credit to The Minuteman Blog for shining some light on this excellent example of independent thinking even deep inside the herd mentality of party politics.

LOOK: Here are 50 political terms you should know before the upcoming election